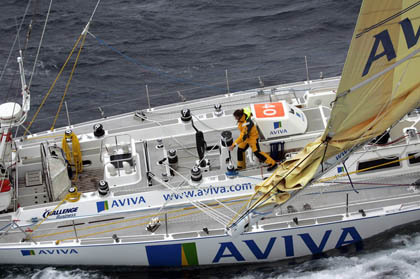 Dee Caffari's round the world yacht Aviva is a 72ft Challenge one-design yacht, designed for round the world races and conceived, built and modified by Andrew Roberts. The class is renowned for its ability to sail safely against the wind in the most hostile conditions of the deep Southern Ocean.

For Dees solo voyage, Andrew Roberts and his team had just eight weeks to transform a yacht that had been specifically designed to keep a crew of 18 people on their toes to a boat that Dee could handle alone, and would be reliable throughout a non-stop circumnavigation lasting up to six months.

A central consideration was to make sailhandling safe and efficient for Dee, minimising the risk of injury and sail or rig damage. Furling gear was added for the headsails and lazyjacks and hayracks fitted to the boom to catch the bunt of the 112 square metre mainsail when reefed. A grinding pedestal was also installed in the centre cockpit to allow Dee to reef and set sails with the minimum of movement round the deck, so reducing the risk of injury.

Maximising power downwind was another major consideration. Setting and flying a spinnaker on a heavy displacement yacht can be tricky, even for a crew, so Andrew and his team added a carbon fibre bowsprit on which a big reacher and an asymmetric spinnaker could be set. As well as making it easier and more efficient for Dee, this enabled the other headsails to be kept to a manageable size.

Two independent and completely interchangeable hydraulic autopilots were fitted and there were a plethora of other developments and design alterations, from simple practicalities such as a bunk near the navigation table to special gimbaled cookers.

Throughout her record round the world voyage, Andrew and his team provided 24-hour technical support.