Andrew Roberts Projects is back in business!

After an amazing three year project with Dee Caffari and the Aviva Ocean Racing Campaign, Andrew Roberts Projects lives again! I’m actively seeking new and interesting projects where I can make a real contribution by using the experience and expertise I’ve gained during thirty years or more in the marine business.

Why was the Aviva Ocean Racing Campaign amazing?

It was amazingly successful because Dee did a great job, we as a team ticked all the boxes and brought the project in significantly under budget!

What’s more, for me as Campaign Director, it was at times tense and worrying, but the underlying strata of confidence in Dee and a strong team underpinned even the worst bits. The best bits were achieving virtually all the goals and the elation of being part of a very successful project.

It was also amazing because at the outset Dee had not seriously sailed an Open 60, there wasn’t a boat, and there was no company, offices or infrastructure. So we bought an Open 60 as a training boat for Dee, established offices, employed people, created the infrastructure, had a new Open 60 built by Hakes in New Zealand and project managed by Joff Brown, shipped it back to Portugal, then training, Transat, and a very successful Vendee!

If you have a great sponsor like Aviva it’s all fairly straight forward. Yes the budgets were big but the targets were demanding and the corporate governance very real.

We clearly stated at the very start, that we intended to be one of (if not the) most professional and properly managed teams in the Open 60 circuit, but others will judge that.

But as Chay Blyth was often heard to say, (and I’m sure still does say) “yesterday’s news is today’s chip paper” - so for me the future is “where it’s at”.

Even great projects come to an end

The Aviva Ocean Racing campaign has ended, but Aviva are continuing to support Dee in her efforts to make sure she’s on the the start line of the Vendee Globe 2012. After a truly great three year project, all those all those closely involved are immensely proud that Dee has achieved so much and the whole project ticked every box by achieving all the principle goals, whilst the project was significantly under budget.

Dee will I’m sure go on to even greater things and she has my best wishes for the future. Aviva have been a great sponsor and together with Synergy (Aviva’s PR and event management company) their key representative have been a a pleasure to work with. Steven Paine, Sarah Loughran, Hugh Francis and John Whitley of Avia, Alison Moore, George Spring, Roberto Codalangelo and Caroline Ayling of Synergy were all deeply involved with the project at various times, but Sarah and Roberto were the “glue” that drove it forward and are to be congratulated.

For my part and as planned, the project has now also come to an end and I’ve enjoyed every minute of working with the team players who make things happen. After a good holiday I’m intending to move on to new and interesting projects although maybe not on the scale of the Aviva Ocean Racing campaign.

At last the announcement by Dee Caffari and Aviva about the Aviva Ocean Racing campaign means that I can talk about what I’ve been up to for the last three months.

As Campaign Director, this is a fantastic project for me to be involved with and it’s great to be working with Dee again.

Starting from scratch on a project like this with the sole focus on Dee sailing alone round the world again, this time the quick way in the 2008 Vendée Globe round the world race, is an amazing opportunity. We have bought Mike Golding’s first Open 60 as a training boat, and the exciting news is that we’re going to design and build a brand new state-of-the-art yacht to give Dee the competitive edge.

I’ve had a long working relationship with Dee, we have a great team in place and this will be a fully funded and totally professional racing campaign.

By pure coincidence, I went sailing with Mike Golding in his 60 Ecover last summer before this project began (see below), but in fact my interest and involvement in Open 60s goes back to 2000, when I had the idea of two fully crewed, international events: the EDS Atlantic Challenge and what became the Calais Round Britain Race.

It’s interesting to look back and see how these first crewed races started a change in the design criteria of the class towards multi-discipline boats and brought in many new sailors. So it’s funny to think that I’m back for more!

The Aviva Ocean Racing website: www.avivaoceanracing.com and Dee’s www.deecaffari.com both have more detail.

Read all about it! 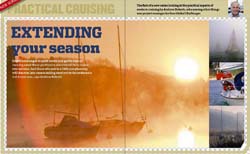 One of the highlights was going to Las Palmas for the start of the ARC. I was extremely impressed by World Cruising Club’s team and their cool, calm, highly organised and helpful management of a big event. Las Palmas was very supportive, which helped create a great atmosphere with a real buzz. I would definitely recommend going to the ARC as a journalist because it allows you to speak to so many people, and as to the opportunities to eat and sample the wines, well that’s another story...

My series of practical cruising features was published last autumn, with more to come in the January, February, March and April issues this year.

I last went for a sail with Mike Golding over 10 years ago whilst doing trials before his first single-handed circumnavigation in Group 4, so the invitation to sail on his Open 60 Ecover was an important occasion for me.

Blue sky with 15 to 20 knots of wind and some heavy squalls of over 30 knots made for a great day's sail. In flat water upwind, over 10 knots is effortless and downwind 20 knots easily attainable, but the most surprising thing of all to me was how well balanced Ecover is and what a pleasure she is to sail.

I really didn’t think that such a big back end, fine waterlines forward, small dagger board and canting keel could possibly allow any boat to be well balanced and controllable at all angles of heel but she is. Merv Owen and Alan Clarke certainly got it right and Mike’s input is quite visible.

A conducted tour inside, or rather a crawl about, with Mike revealed a nicely engineered and well thought out carbon fibre structure and a highly developed ballast tank system. It’s difficult not to be curious about the keel area after all the Volvo problems, but Ecover’s structure in way of the keel box and ram anchorages exhibits how a highly experienced and inovative team can understand the massive loads and produce a succesful but light weight solution to a complex problem.

Like all Mike’s boats she was very well thought out, beautifully maintained and ready to go again. I hope I get invited to go for a sail offshore so I can see what she’s like in the bumpy stuff.

Despite the onEdition photograph, I have no intention of competing with Mike Golding (or should it be Robin Knox-Johnston) in the Velux 5 Oceans! 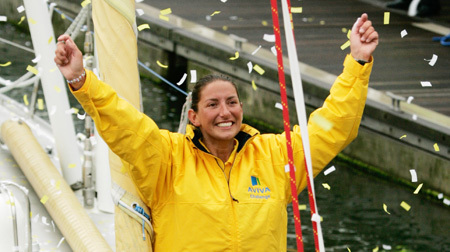 What does it take to sail alone round the world - apart from the obvious ingredients of seamanship, experience and dogged determination? Dee Caffari's log books and personal accounts have revealed some less obvious pieces of the jigsaw.

On a 29,227-mile circumnavigation with a massive surfeit of wind and water, it's interesting to see how big a role fuel played: Aviva's Northern Lights generator ran (trouble-free) for 1,469 hours - or the equivalent of 61 days. That makes a total of 2,304 litres of diesel used for a modern-day record.

The punishing regime of the single-hander is graphically illustrated in Dee's log books. She wrote and initialled entries meticulously on the hour, every hour, rarely omitting an entry because she was asleep. Her specially modified saloon bunk was used only a few times, and not once in 89 days in the Southern Ocean did she stretch out in it to sleep.

Despite that, Dee returned in good health. The only items used from her medical kit were one small pack of brufen and some latex gloves that went to create a makeshift autopilot hydraulic system breather pipe expansion balloon.

Among her tally of gifts to Neptune, deliberate and accidental, were a family photograph, some champagne, one winch handle and a waterproof floating torch (clamped in the mouth but lost when uttering some choice words to a furling drum).

Finally, what don't you need during six months at sea? Money, for one thing. Dee plainly never had failure in mind: she sailed round the world without taking along a single penny.

A chapter of sailing history

When Dee Caffari crossed the finish line of her record voyage alone round the world westabout on Thursday 18 May 2006, it marked not only the end of a monumental six-month odyssey, but the culmination of an amazing chapter of sailing history.

The end of Dee's voyage clocked up the 3 millionth mile sailed safely by two fleets of steel cutters built and prepared by Andrew Roberts and his Challenge Business team. Since 1989, Andrew has created his own unique record, producing the yachts for 620 amateur crews to sail round the world the hard way in complete safety, as well as supporting three professional solo circumnavigations by Mike Golding, Samantha Brewster and now Dee Caffari.

After 178 days at sea in an incredibly harsh environment, Dee's yacht Aviva told another exceptional story. Intermittent faults with the autopilot hydraulic systems had been the only problems. There was no major damage or downtime on this record attempt and Dee returned with a defects list totalling just 17 items, and that includes 'one slightly bent stanchion, port heads light temperamental, and port deck speaker not working'. This a vivid testimony to Dee's extraordinary seamanship, and the work done by Andrew Roberts and his team in modifying Aviva from fully crewed to solo mode, a job done in a mere eight weeks, on a very tight budget.

Along with Dee's experience and instincts, these adaptations produced another first for Dee and Andrew's team: on crossing The Lizard finish line, she earned the superhuman distinction of circumnavigating in the heaviest displacement yacht ever to be sailed alone round the world in any direction by a solo sailor.

Read about Dee's incredible voyage in the latest Yachting World, or to find out more about her yacht, click here